Do you enjoy the mesmerizing melodies coming from the funniest folk? Do you like to bang your head with the limitless blasts of extreme metal? INCURSED is your band! Help us release our fourth album!

Add this reward in case you need international shipping

Brotherhood Pack:
¡Incursed collaborates in your album! Clean and harsh vocals, guitar and keyboard solos... whatever you want!
(ask the band for more information)

Put your company logo in our album!** Also includes a Svolder Pack.
(ask the band for more information)

Do you want Incursed to play in your festival?** In your venue? In front of your house? This is your chance! Includes a Svolder Pack.
(ask the band for more information)

Would you like to get Jonkol's keyboard? Now you can!

Do you absolutely need Asier's guitar? Now it's your chance!

Who are we? What's this all about?

We are Incursed, a Folk/Pagan Metal coming from Bilbao (Basque Country). We started playing almost 10 years ago, and our current line-up is as follows (from left to right):

Our main intention is to release our fourth LP, entitled Amalur, in spring of 2017, and we need your help to do so. This album will be more oriented to our culture in the Basque Country, although we won't leave our humorous and creative point of view aside when it comes to build up new stories.

About music, everything that Incursed had developed in previous albums will be sacrosanct: melodies, epicness and power applies to these songs, but this time we have attempted to look after every little aspect within this album. It is a more melancholic, personal work, but also much more intense. We believe it goes beyond everything we've done previously.

It certainly is an economically huge process, and that involves to get all the help we can get.

The last album we released, named Elderslied (and also funded through Verkami), got outstanding reviews from the specialized press. You can find some of them by following this link. It is also possible to listen it on this small applet:

You can also watch our last music video here:

Contributions will be used to finance production costs for the album (recording, mixing and mastering) at Chromaticity Studios with Pedro J. Monge, and merchandise rewards (CDs, T-shirts, hoodies...). Likewise, every aspect of the artistic design, which will be made by Warbanner.eu, will also be funded with your support.

This €2,500 barrier we have defined will not make it possible to pay everything mentioned up to now, but will mean a superb and indispensable help coming from you.

Additionally, we would like to surpass this quantity in order to create the music video this album deserves, besides providing a physical format as thorough as possible.

The packs include shipping costs, even though we'd like to hand them out to you face to face, so we can properly thank you for your contribution, as well as saving some money.

We are also aware of the current situation regarding people's personal economies. That being so, we've arranged packs that every pocket can afford. Check the lowest ones: 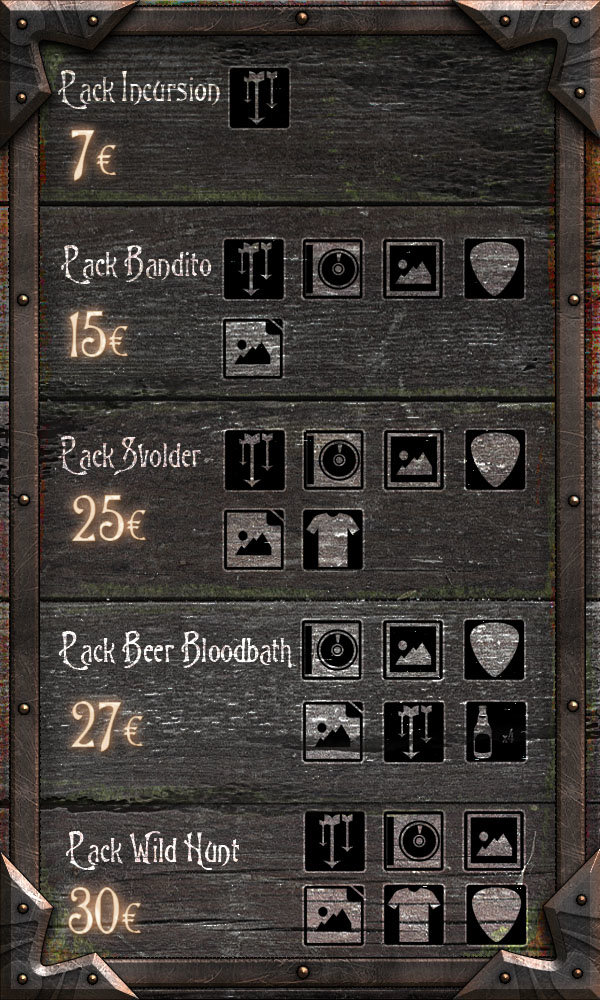 Some a bit more powerful: 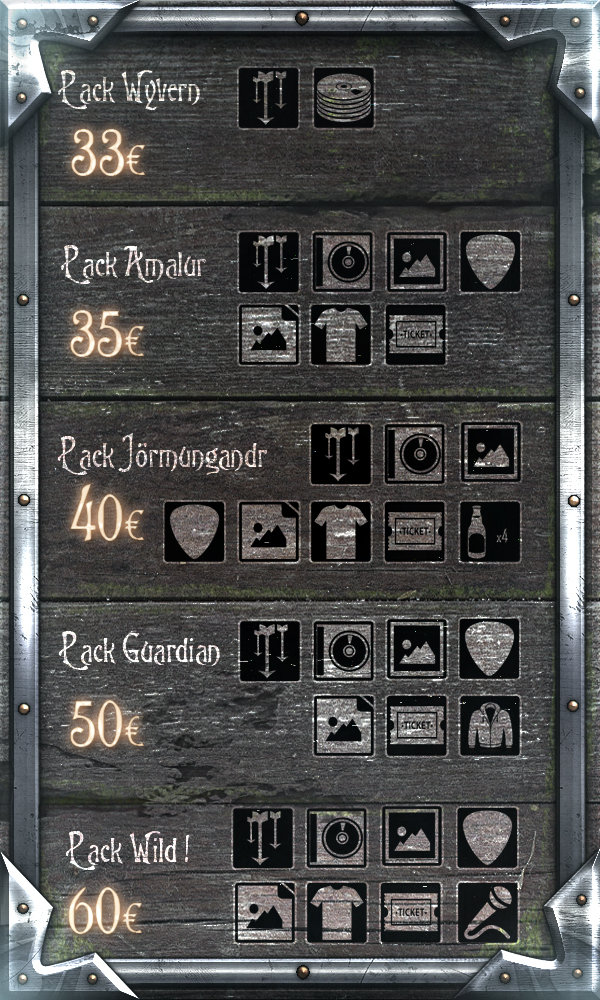 And the most terrible ones: 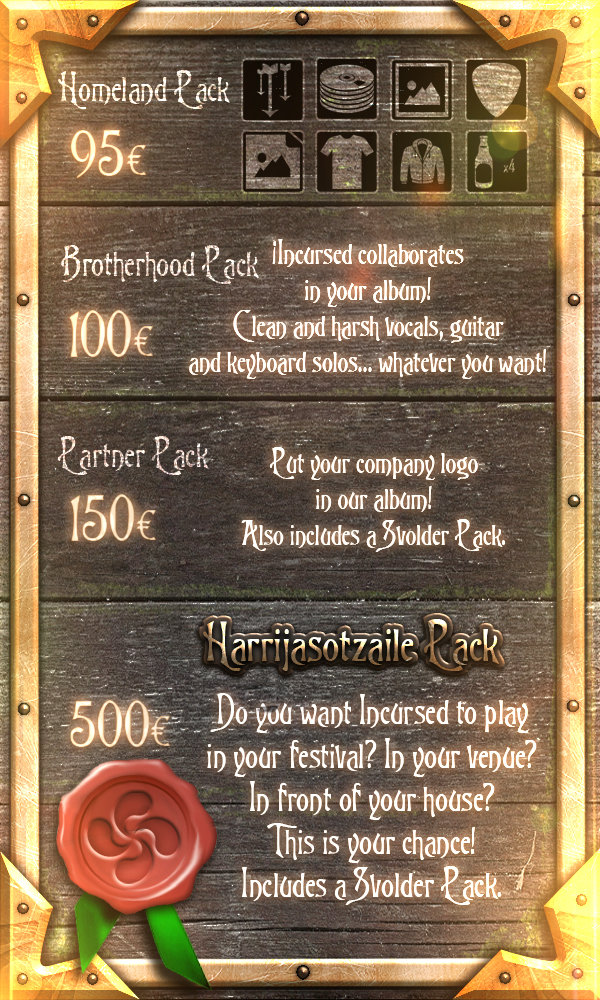 Every contribution is humoungously valuable to us, and we will be eternally grateful even if your help is not in the economic side, by sharing it will all your fellows, friends and relatives through social networks, messaging or face to face.

Sizes are available from S to XXL, and girlies are also available. We have got 3 new designs available for T-shirts: 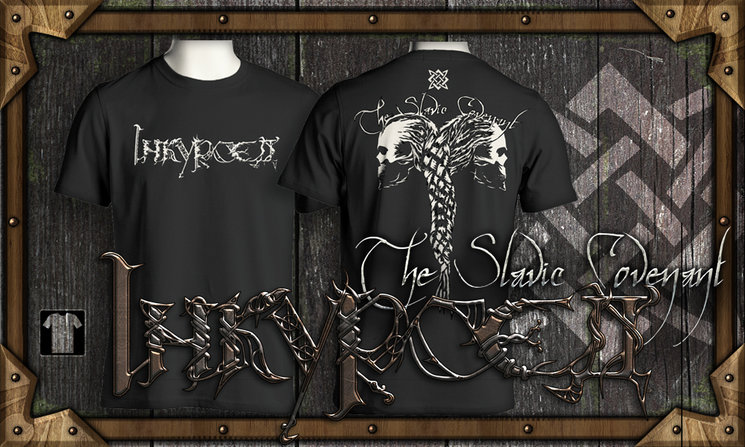 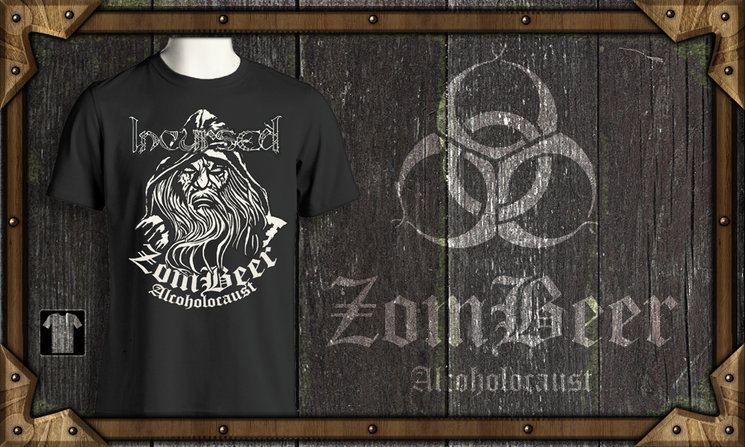 Model: Amalur (in black or white) 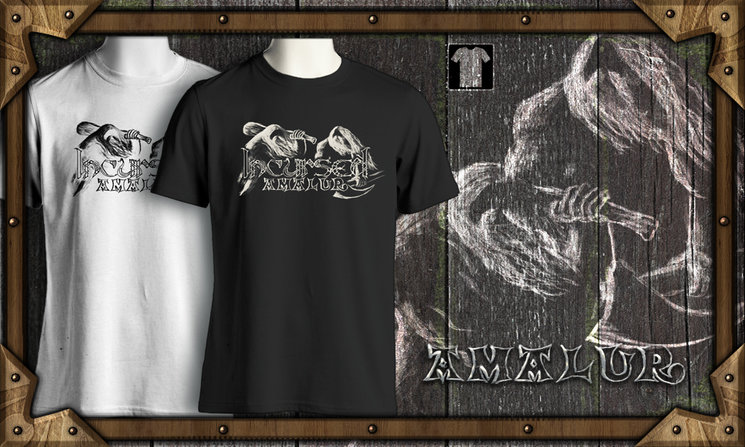 And another one for the hoodies: 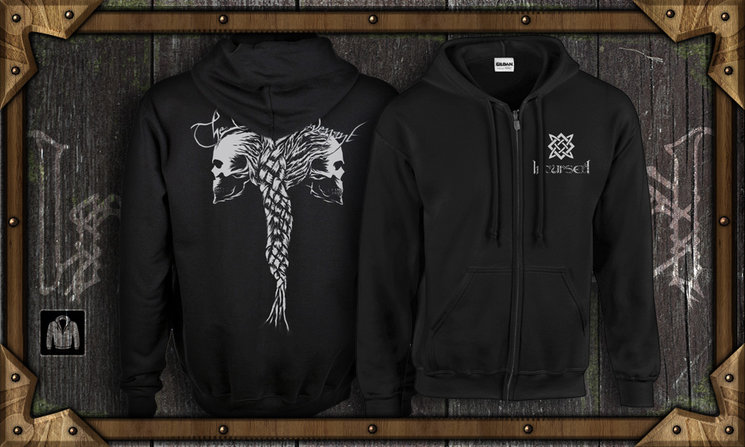 In collaboration with Laugar Brewery, we are going to release our first two beers, called Beer Bloodbath and Zombeer Alcoholocaust.

Beer Bloodbath is an American Pale Ale, with 5,2% of alcohol by volume. Suitable for those who enjoy softer tastes. 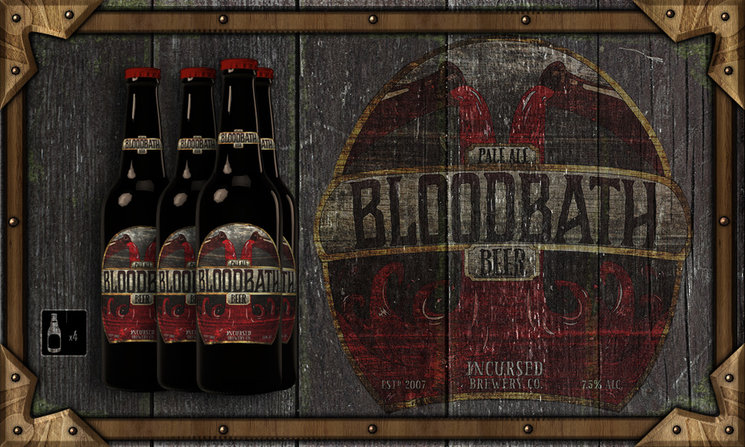 Zombeer Alcoholocaust is a Brown Ale beer, with 7,3% of alcohol by volume. Recommended to those who want a major challenge! 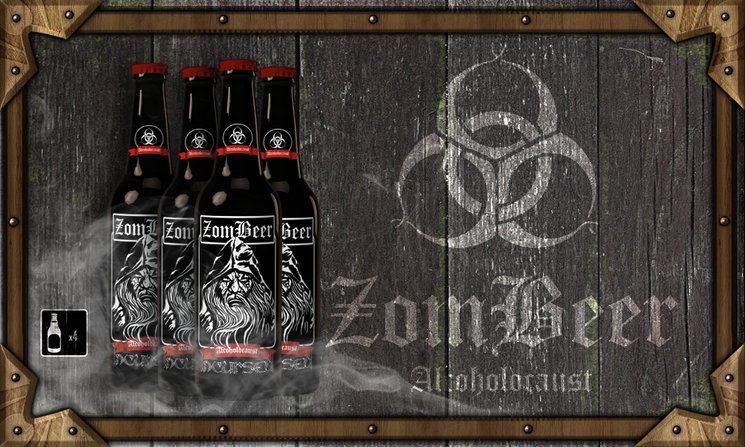 You can get them in 4-beer packs included in the rewards (4 beers of the same choice for each pack).

Want our instruments? They can be yours!

We want to make this crowdfunding campaign entertaining, as well as productive. So we have arranged these milestones so you can trigger some events regarding the album and the band, by making your contributions, even putting our dignity in risk. Where will be able to reach for?

UNLOCKED!! 250€: We'll tune our guitars to get a warm sound for your ears.

UNLOCKED!! 500€: Vocals will be tuned to satisfy your deepest aural desires.

UNLOCKED!! 750€: Some distortion for the guitars, to softly destroy your eardrums.

UNLOCKED!! 2000€: We will upload a making-of video with all the progress made.

UNLOCKED!! 2500€: ¡PROJECT CROWDFUNDED! We will reveal the tracklist of the album.

UNLOCKED!! 3500€: We will show you a new song before the album is released.

15000€: Lander will perform a striptease coming out from a giant cake!

About the progress schedule

As for now, the tasks are progressing adequately. Details as follows:

January 2017: we will enter Chromaticity Studios with Pedro J. Monge to record vocals, choirs, acoustic guitars, and the rest of percussion. Also, the collaborations arranged will play their role in the album.

February/March 2017: time for the album to be mixed and mastered so we can achieve the best sound quality for this album.

April 2017: The album will be finished and handed it over to all the pledgers in this campaign.

Beers are ready and the copies of Amalur and The Slavic Covenant are already being processed, so expect us to start sending the crowdfunding rewards on September. We are fuckin' anxious to send all of them! 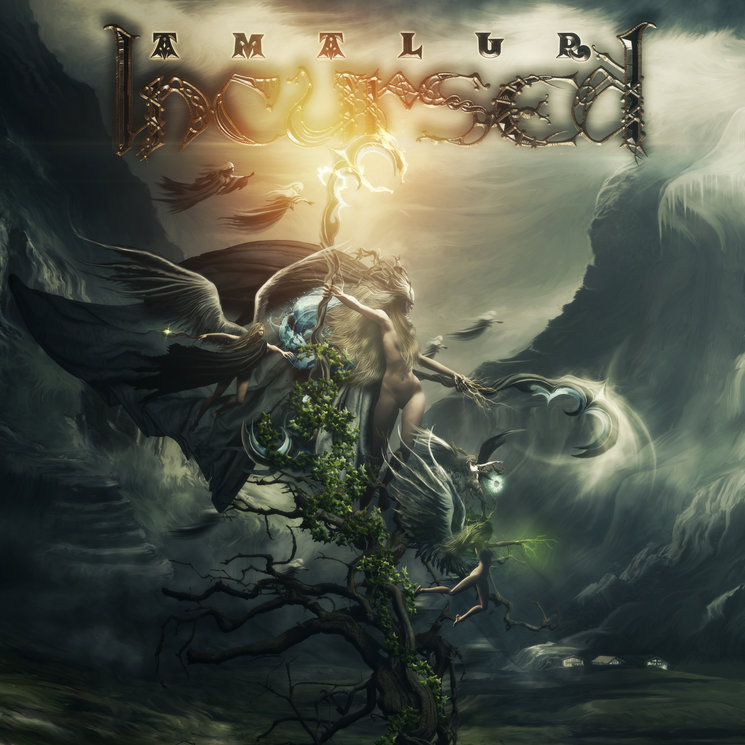 The time has come... 3000€ in our crowdfunding campaign. As promised: here's the artwork cover of #Amalur. Hope you like it as much as we do!

Less than a week to contribute to the campaign... let's see if we can convince you with this! 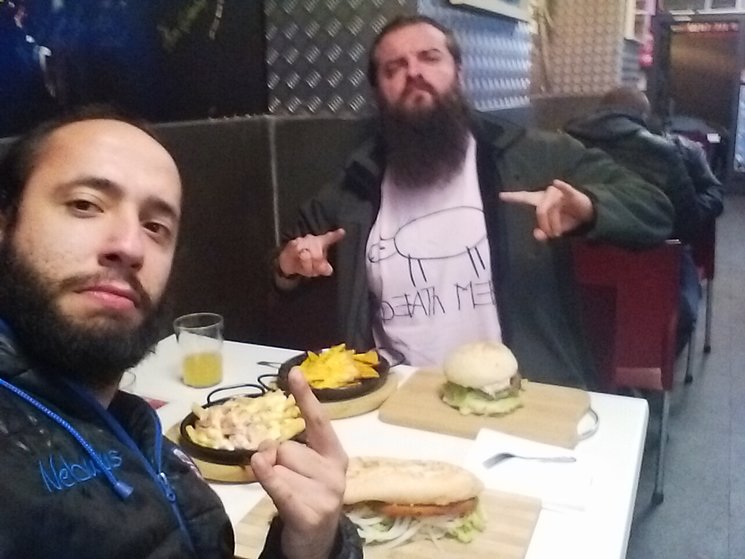 Bandits! How y'all doing?

We've been recording vocals these days for Amalur, our new album, and as you can see, so hard sacrifice requires adequate compensation to make it possible. By all means! 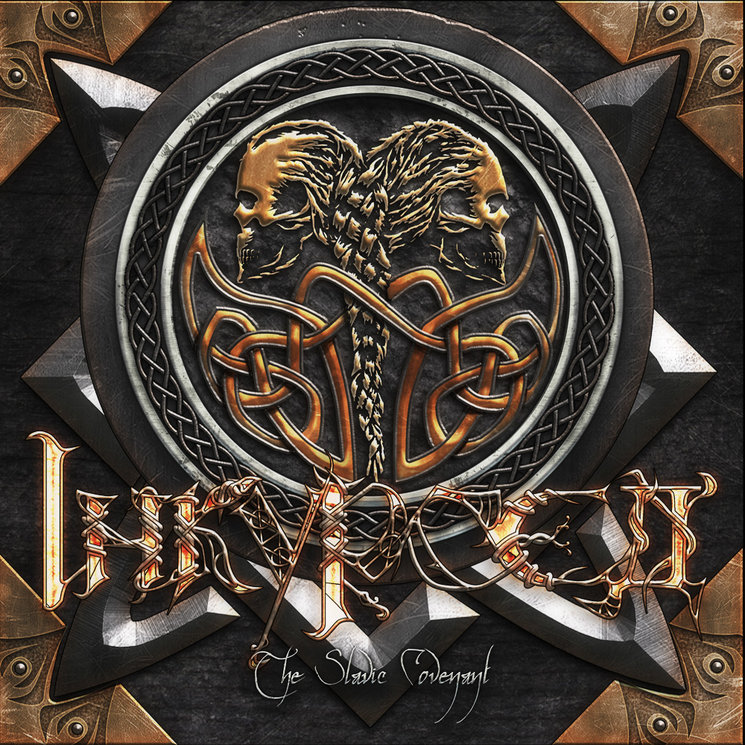 We are a bit late, but here's the tracklist of the EP we are going to release before Amalur. It will be entitled The Slavic Covenant, a tribute to Ukraine and the adventures we lived there in 2013. The tracklist is as follows:

Add this reward in case you need international shipping

Brotherhood Pack:
¡Incursed collaborates in your album! Clean and harsh vocals, guitar and keyboard solos... whatever you want!
(ask the band for more information)

Put your company logo in our album!** Also includes a Svolder Pack.
(ask the band for more information)

Do you want Incursed to play in your festival?** In your venue? In front of your house? This is your chance! Includes a Svolder Pack.
(ask the band for more information)

Would you like to get Jonkol's keyboard? Now you can!

Do you absolutely need Asier's guitar? Now it's your chance! 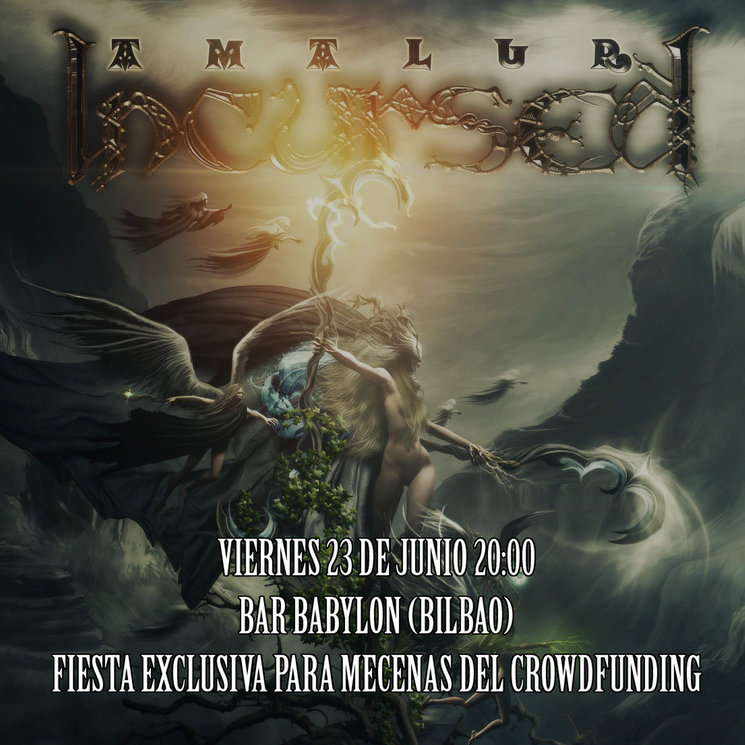