Mary Lambourne is releasing her first album 'Marinero en tierra', but needs help to finish it.

I'm Mary Lambourne, singer and videographer. Thank you very much for coming here to learn a little more about this project in which we have been sailing for some time with a lot of energy and enthusiasm.

The album Marinero en tierra (Sailor on land) is made up by 14 own songs from a selection of poems from the book Marinero en tierra by the Andalusian poet Rafael Alberti, published in 1924 and which won him the National Poetry Prize of Spain.

To make this project possible, I’ve had the collaboration of the sailors Guillem Fullana (guitar), Juanan Torandell (double bass) and Teo Salvà (drums) who have sailed with me against all odds to get it ahead. I also had the good fortune of bringing on board Albert Blasco (piano), Félix Rossy (trumpet), Albert Florenza (flamenco guitar), Lluís Oller (percussion) and Jordi Tugores (guitar), incredible musicians and coleagues, plus all those unconditional ones without whom this project would not have reached the shipyards.

Thanks to a grant from the Institut d'Estudis Baleàrics we have been able to record, at Alquimia Records Studios with the amazing sound engineer Jordi Tugores, the songs that make up this album. We are also happy to have the collaboration of Taller de Músics, which has hosted Marinero en tierra on its record label La col·lecció del Taller and will be distributed by Discmedi.

Now we need a final push to make a good digipack (with a booklet that includes all the poems and photographs of the project), copies and cover the costs that a project like this involves. That's why we invite you to come on board to help us take this boat to port. We need to finish building it so that it can sail to new horizons and share it with the world.

Become a sailor! Be our patron!

I'm from Valldemossa (a small town in the northwest of Mallorca) but I studied Fine Arts in Barcelona, where I lived for more than ten years.

Five years ago I returned to Mallorca with my partner and colleague Lluís Oller and decided to settle in Ses Salines (The Salt Marshes), an area of the island for which I had always felt curiosity but was virtually unknown to me. It was then that we discovered the history of the salt marshes that name the village and we started the Salinautas project, an artistic tandem that bifurcates between sea and land, each one of us following our own artistic path without losing sight of the other. My gaze was always towards the sea, creating photographs with my voice, singing verses of poets who have written to the sea and salt.

Whilst I was working on this project I found, or rather, rediscovered the book Marinero en tierra. Immediately I felt identified with the feeling that its poems communicate: the nostalgia for his native land, the sea, the salt marshes... The verses of Alberti could be referring to the same landscape in which I grew up and which I so much longed for when I was away. It is precisely the nostalgia for that landscape that had returned me to my place of origin.

For a long time, my family and friends have encouraged me to record an album, I have been singing and giving concerts for years, but I hadn’t found a the right project to jump into such an adventure. I didn’t want to record an album of covers, I wanted to find a personal project in which I could turn over everything I had lived, learned and felt, a project that would mean a personal challenge.

The discovery of these poems opened a universe full of possibilities in which, through the words of Alberti and the incredible musicians whom I’m lucky to collaborate with, I have found my own landscape: a place within Jazz, Mediterranean music, Latin music and flamenco.

The recording, mixing and mastering of the album is almost finished, it just needs the final adjustments!! If the wind is favorable, thanks to your support and your contributions, we hope to have the physical album in December 2017 / January 2018. Then it can sail all the way to your homes. 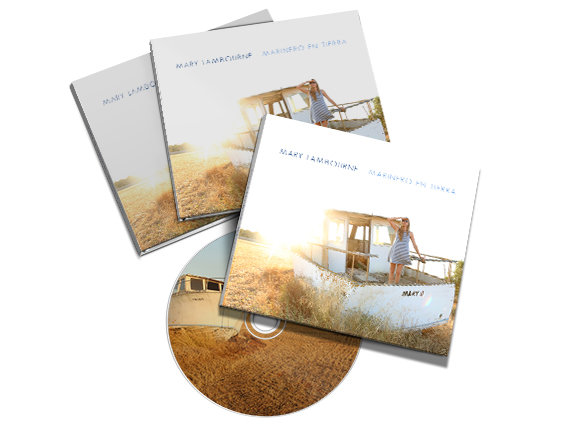