A young man goes through an existential crisis. Is the freedom he dreams about real? An old acquaintance will help him find out. 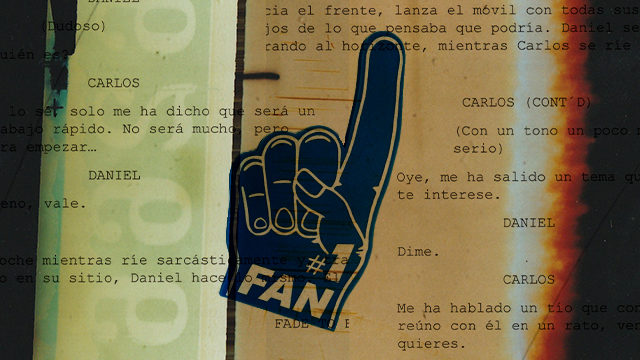 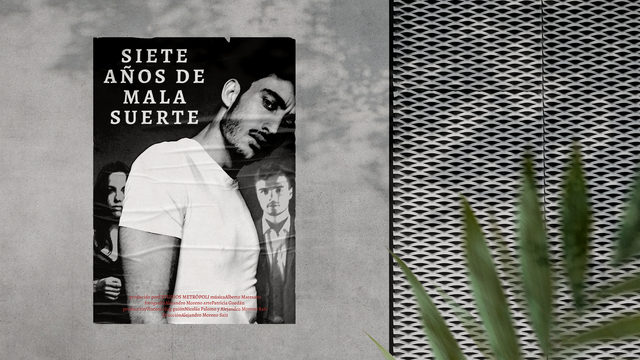 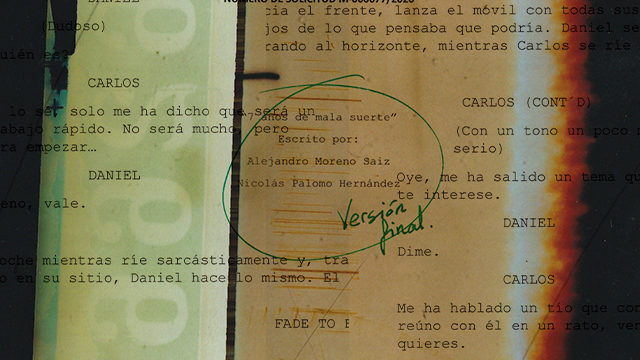 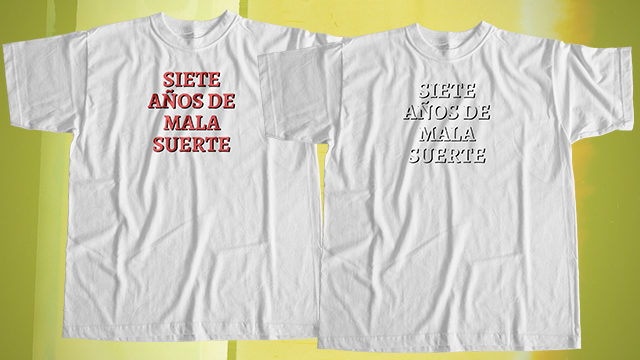 Patron of the Arts

(Please indicate one of the two designs) 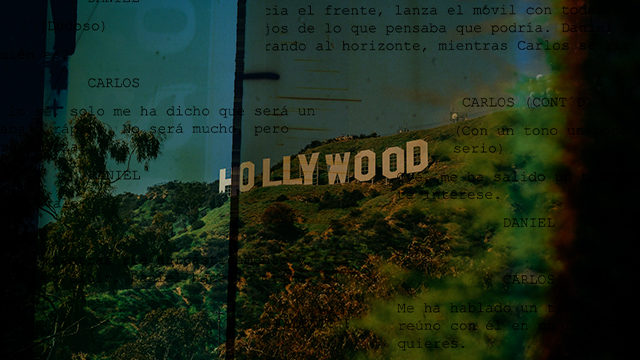 Siete Años de Mala Suerte is a short film that talks about freedom, youth, and destiny. This is a low-budget project, but strongly ambitious, created by determined young students with high expectations. Siete Años de Mala Suerte doesn`t seek to be more than that, a project with marked influences that tells an important story about the vital dynamic of the majority of the youth nowadays.

To show you our appreciation for your help, the least we could do is return the favor with a gesture that symbolizes your connection to the project.

We thought that having an early-access link of the short and receiving an acknowledgment in the credits was not enough, so we have decided to include things that will for sure excite you!

If you contribute with 10€ or more, we will send you the official Siete Años de Mala Suerte poster printed with a personal dedication signed by the team.

But that's not all, if you contribute with 25€ or more, besides the poster, you will also receive a physical copy of the latest versions of the script with a personal dedication signed by the writers.

You can also get one of the two official Siete Años de Mala Suerte t-shirts, red over black or black over white. It's your choice! All this with donations of 50€ or above.

Lastly, and therefore most importantly, if you contribute 100€ or above you will receive the official title of associate producer of the film and therefore you will appear in the credits as such, with the title you deserve.

We hope you like these rewards and THANK YOU for being a part of this film! 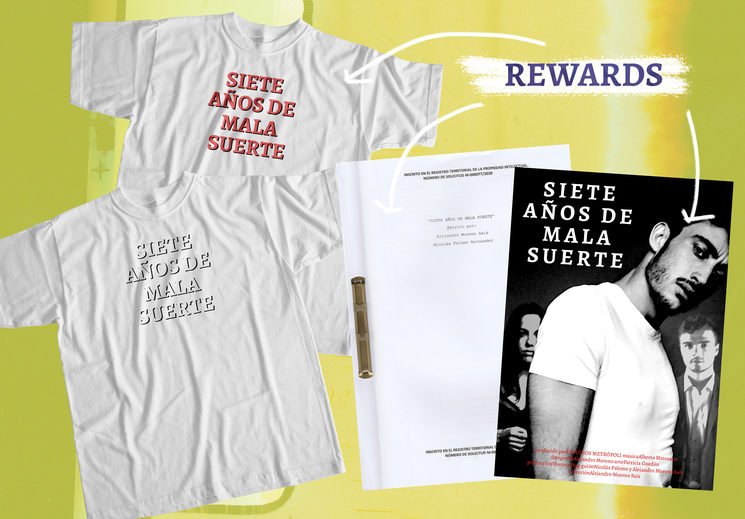 A student of Audiovisual Communication in the Rey Juan Carlos University of Madrid and co-founder of Estudios Metrópoli, he takes his first steps towards a future in the entertainment industry with the production of an original script and his first project as director.

A business student at IE University and Peking University and co-founder of Estudios Metrópoli, he started his career in the entertainment industry in Los Angeles, studying Film and Business at the University of Southern California, working on a TV pilot and establishing connections in Hollywood. Currently, he studies between Madrid and Peking, complementing his studies with audiovisual projects such as his university's TED talks.

A student of Political Science and International Studies at the Carlos III University of Madrid. He ventured into the world of writing through poetry, as a transition to becoming a scriptwriter for film and television. A constant learner, he aims to combine his creative facet with his international relations studies, his other passion.

A University of Surrey graduate in Creative Music Technology, he has been awarded in the Genre Celebration Festival of Tokyo and nominated in the Golden Shorts of Rome, for two different soundtracks. His experience in the entertainment industry and his current work as a composer for the soundtracks of the cars of the future make him a stellar element in the production of this short film.

A student of Fine Arts at the Complutense University of Madrid and psychology at the UNED. She aims to give her creative vision in the project and adjust her knowledge about visual creation to the proposed aesthetic.

To succeed in this endeavor, we knew it was essential to count on great actors and actresses, and that is why we are happy to present to you the cast that will be part of this adventure.

With the funds we have raised thanks to your help, we will make a distribution between the following categories:

The majority of the funds will be allocated to audiovisual rental material, which means lighting, sound, camera, etc.

The Art Department is truly important, and that's why we want to dedicate part of the funds towards it, in the form of props, paint, and other aspects of scenography.

We also have in mind the distribution of the film once the production is finished. This implies mostly the submission and application to many international festivals, and to be able to pay the entrance fee for these festivals we will dedicate part of the financing to it.

After everything that has happened this year, we cannot forget to ensure the safety of everybody working on this project, that is why we believe it is fundamental to invest in measures that avoid the spread of COVID-19. At all times on set we will provide sanitizing gel and face masks for all cast and crew to use.

Last but not least, we will also finance the travel expenses of cast and crew to those locations that require long distances, which accounts for about half of the shooting. We will also provide water and food (some fruit and deli) on the heaviest shooting days.

IMPORTANT! Since this is a very low-budget film, we cannot afford to pay for the work we do on this project, which includes cast and crew. All the funds will be allocated to the mentioned elements necessary to deliver a high-quality short film. However, in the case of generating profit or having fewer costs, all money will be destined to paying cast and crew as compensation for their hard work. 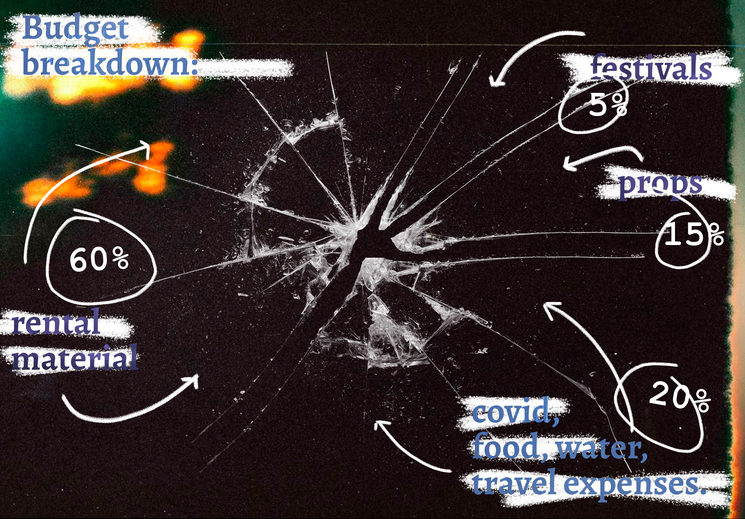 Let's get organized! All the production process has already been in the works for some months and pre-production is practically completed.

The shooting will start on the 12th of December and will extend until the 15th of that month.

The post-production starts when the shooting is finished, and if everything goes according to plan, the final version of the project should end in the second half of January.

After that is the premier, which will depend mostly on the conditions and the dates of the festivals which we will attend, but all the helping family of this project, in other words, all of you, will have an early access link to the film.

Finally, we will proceed to the shipment of the rest of the awards to those lucky contributors, which we calculate should arrive between February and March.

If you want to keep helping, please follow us on our social networks to increase our visibility so that Siete Años de Mala Suerte and future projects can reach more people :)

And finally, thank you so much to everybody who has helped in whatever shape or form! Thanks to all of you the project will be able to go forward. ¡THANK YOU!

Patron of the Arts

(Please indicate one of the two designs)