Every creative process is an act of self destruction. Psychological horror feature film. 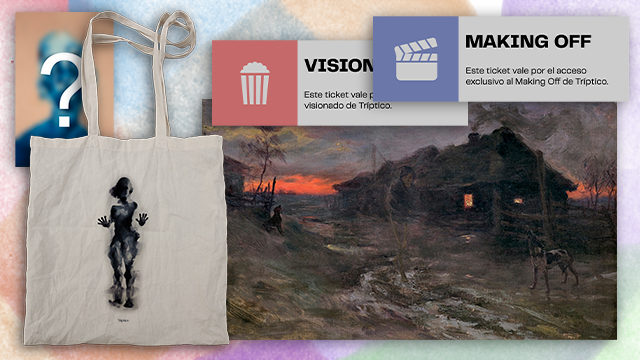 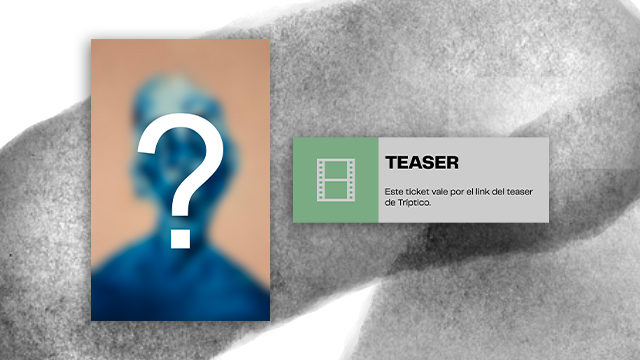 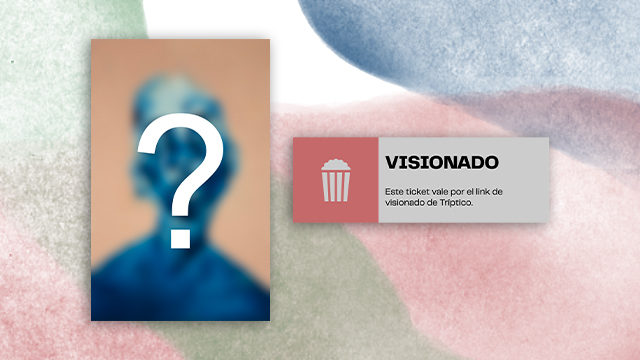 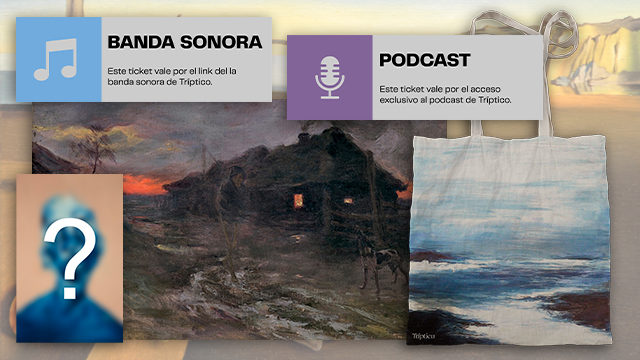 The persistence of Lucas 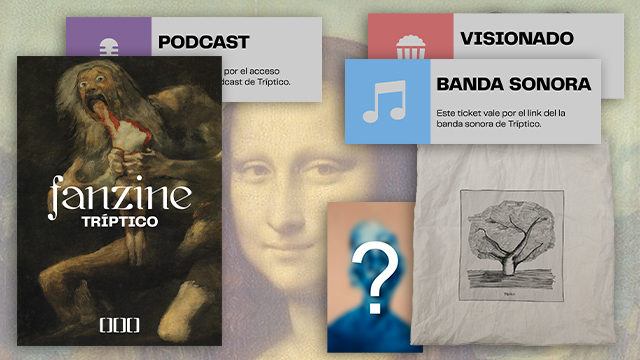 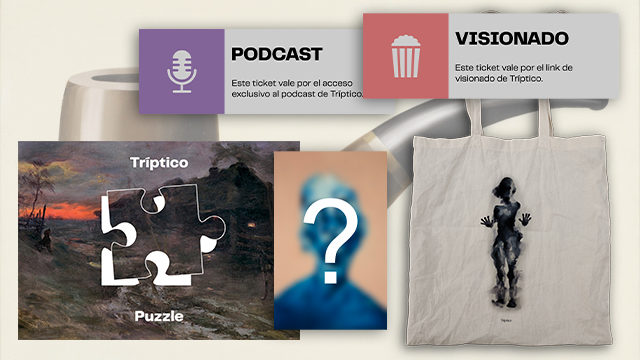 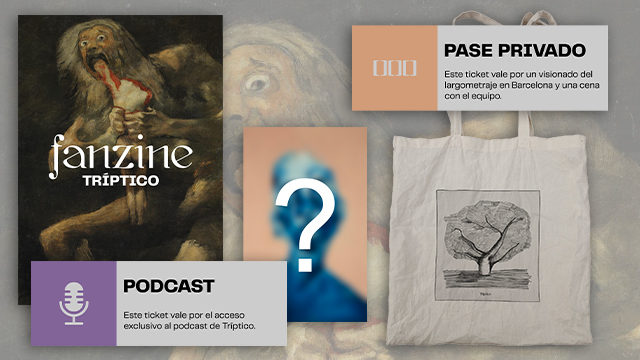 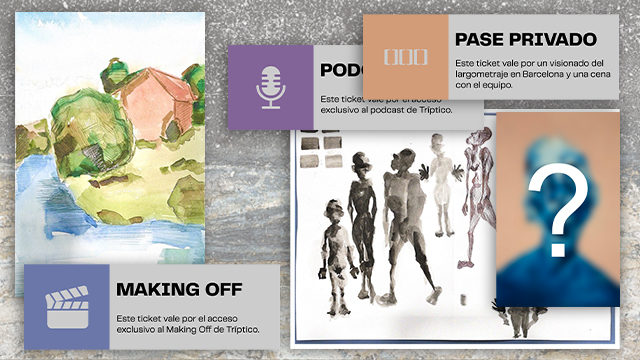 The renowned paranoias of the night 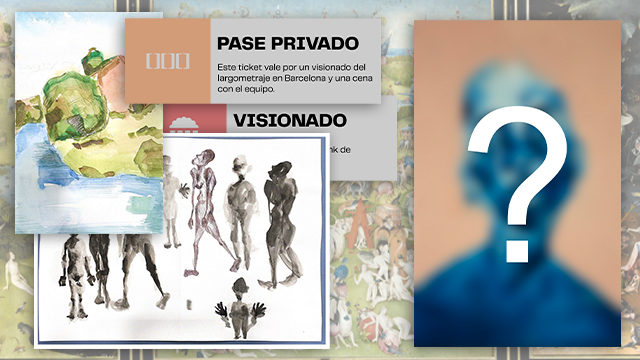 The garden of earthly delights 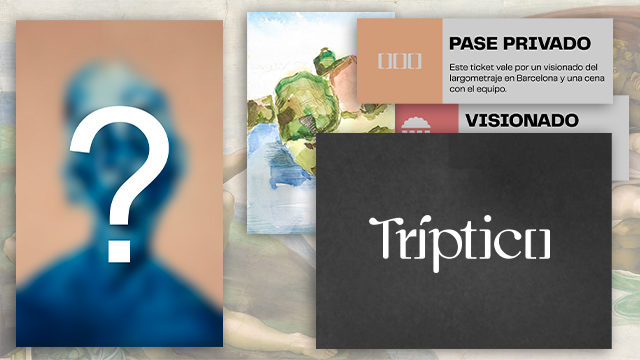 Tríptico is a fictional feature film produced by six students from the Pompeu Fabra University as part of the final project of our degree. The movie, a mix between psychological horror and drama, delves into artistic creation and the limits between fiction and reality. We always wanted to narrate an introspective and opressive tale which every artist could feel identified with, so our whole movie stars only two characters and takes place in a single enclosed location.

This project is born from our artistic ghosts and tells how a creative process can be full of both frustration and pleasure. This is the story of someone who creates. The parallels between us (the creators) and the characters is clear and is evidenced in the film itself. With this Verkami crowdfunding, we are looking to finance a different, risky movie with a lot of effort behind it. We need your help!

After getting it as part of an inheritance, Ana decides to move to her grandfather’s home with her boyfriend Lucas. In one of the rooms they find an unfinished triptych that will make them begin a paranoid artistic process. Their relationship will progressively deteriorate and the limits between reality and fiction will become more blurry. 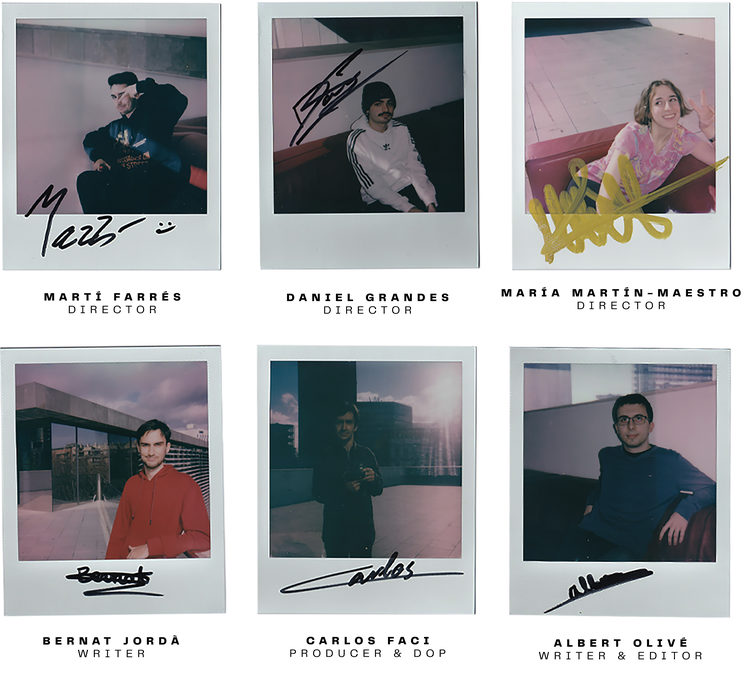 Martí Farrés (Director): I prefer building movies from an image, a title or a space than having a proper plot. That’s why my list of “future projects that may not be done” is full of broken bonsai, May the lights follow us and deserted Norwegian villages. I don’t actually know how to continue this text, so I’m going to show my most provocative (and defining) side to declare that Lemonade mouth is better than any Hitchcock movie, classic cinema is overrated and Jennifer Lawrence invented acting when she played Katniss Everdeen.

Daniel Grandes (Director): I used to be against being called Daniel, but now that’s how I sign almost everything I do (though please call me Dani). My two greatest passions in life have always been cinema and electronic music, so I decided to aim my professional future toward the one that (on paper) involved the least amount of drugs. I spend a lot of time writing about cinema because I’m usually not allowed to film. It’s also easier to say “primultimity” or “solipsism” that putting those into images. Directing the short film Bro was one of the most gratifying experiences of my life. The most gratifying one? To be in a team with these people. All of our frustrations from not being able to go to festivals to destroy ourselves or going across the country in a bus reflect themselves on every frame of this film.

María Martín-Maestro (Director): My two passions are cinema and writing. So, as you can imagine, I like filming things and I want to write several books. I also draw and paint. Going straight to the point, I want to express what I feel. I’m always accompanied by my passion and curiosity, behind which goes my reason. If I forget those priorities, I’m lost. What I always think is that bravery, nonconformism and going a bit beyond what we know makes us move forward, so I try to put my part, now, with this movie.

Carlos Faci (Producer y Director of Photography): Charles, Charly, Carlitos, Facci, Carlota Corredera… I like every person to adapt my name and make it theirs, I think it makes our relationship closer. As I said, even today I think the things I do are almost because of chance. I remember walking out of a cinema with Dani and Bernat and thinking “I want to make movies like that”. Since then our friend group kept growing and with our current group we have worked on projects that range from cinema to television, including radio and videogames. Making Tríptico terrifies me, but at the same time it turns me on. It’s hard to explain.

Bernat Jordà (Writer): A lover of the classics from a very young age, the Marx brothers and Chaplin introduced me to the world of cinema. In recent years, I have discovered that I am fascinated by horror movies, be it the so-called elevated horror or the campy teenager slashers. I would love to do a movie podcast with the other members of this group or continue Pareidolia, our introduction to the radio. I never thought I’d write a movie, but my passion for writing and telling stories led me to embark on this adventure.

Albert Olivé (Writer and Editor): To me, cinema is a passion that comes from my family. From classical to contemporary, from the commercial to auteur cinema (aka. Fast and Furious), I’m fascinated by the power of images. In the second year of my degree I met a group of people as crazy about cinema as myself with whom I could have long and absurd discussions about movies. Two years later, having worked in all kind of projects, from Bro to Coringapp, I still can’t believe we’re working on our first feature film. It’s a hard and arduous project, but one I’m very grateful to be a part of. 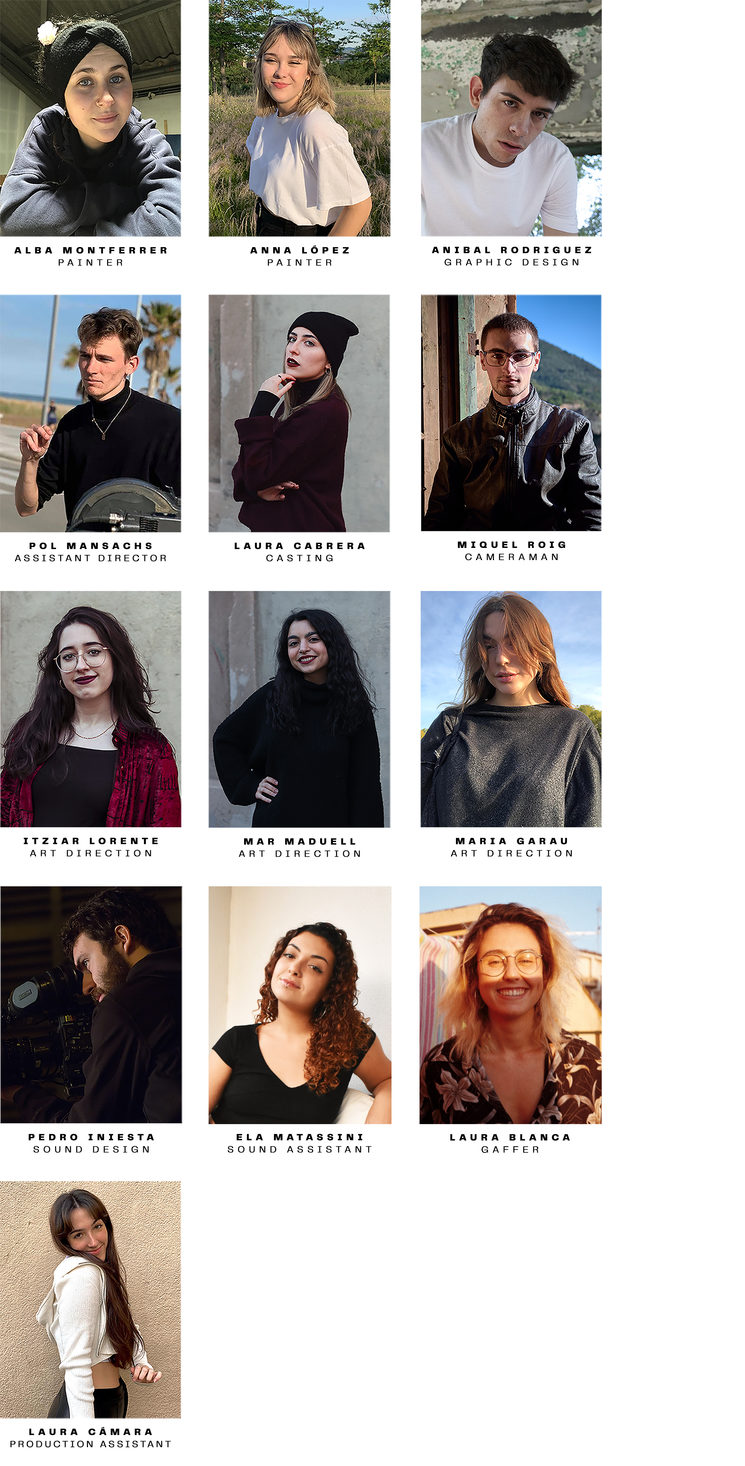 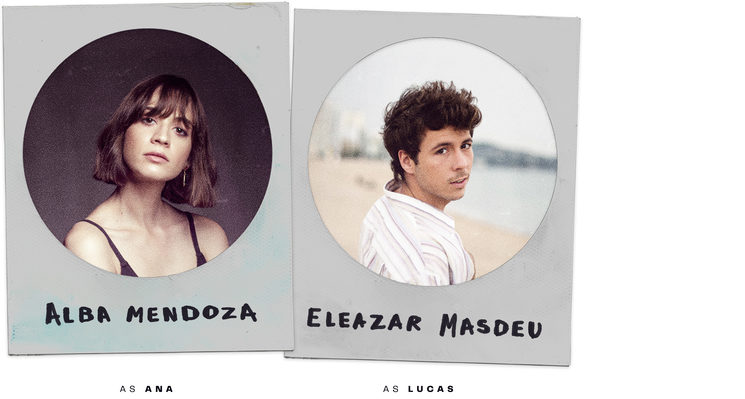 The location, placed in the Gothic Quarter of Barcelona, ​​dazzled us from the first moment due to its visual impact. Full of golden moldings and borders with vegetal elements, the flat is ideal in keeping with the aesthetics of ‘Tríptico’. The imposing painted ceilings or the absence of corridors make this location the perfect place for the development of a plot based on the artistic process, frustration and isolation. 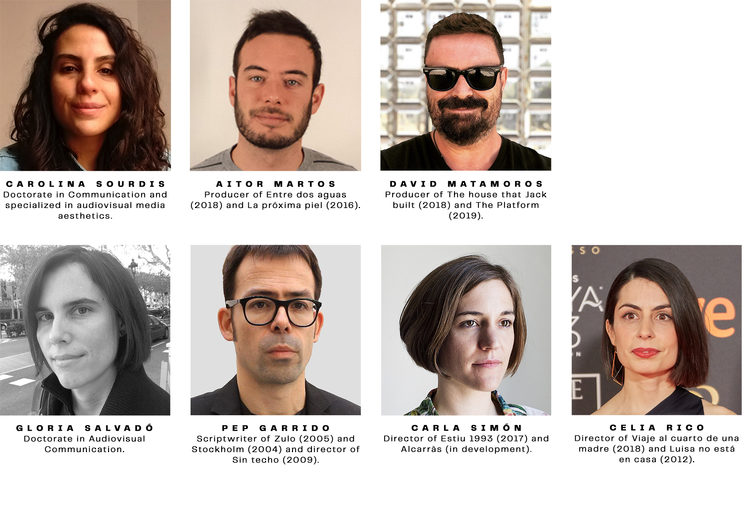 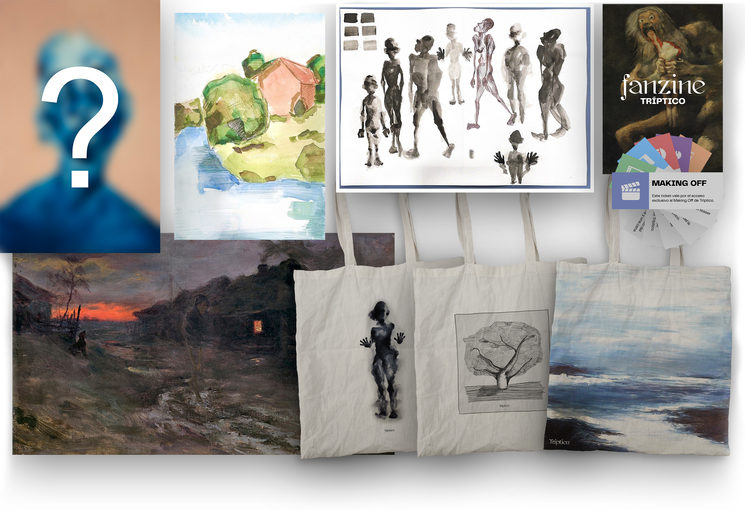 Appearance in the credits: As gratitude for making this film possible, your name will appear in the credits of the movie (and also in our hearts).

Link to the teaser: You will be able to see an exclusive sneak peek to our movie.

Link to the movie: We will send you a link so you can see the full movie before its release!

Totebag: Totebag with designs from our painters (@orozcosoul and @blauklein) so you can choose the one you like the most and carry your belongings on the street safely and elegantly.

Poster: Poster of the movie in A2 size signed with love from every member of the team.

Making of: Exclusive access to the movie’s making of, in which you will be able to see all that’s hidden behind the cameras and the creative process.

Link to the digital OST: Link to the Original Soundtrack of the movie, in digital format.

Creators’ podcast: Exclusive access to a podcast created by the team in which we will talk about the movie, our worries and whatever we want, really. That way you can get to know us a little and we will answer to the questions that you’re interested in.

Fanzine: Fanzine that shows the full universe of Tríptico. From the beginning of the creative process through unique photos, unseen and rejected texts… A trip through the minds and experiences of its creators.

Puzzle of the triptych: Puzzle to choose from the works that appear in the movie. Whichever you like the most.

Private projection + Dinner with the creators: A private projection to see the movie presentially with us and, afterwards, an invitation to our favorite restaurant. A date you’ll surely remember all your life.

Personalized portrait: A unique portrait made by our painters (@orozcosoul and @blauklein).

Triptych canvas (until end of stock): You get the original canvases of the triptych for your home. Yes. The ones used during filming. With all the talent of our painters and the sweat of every member of our team. 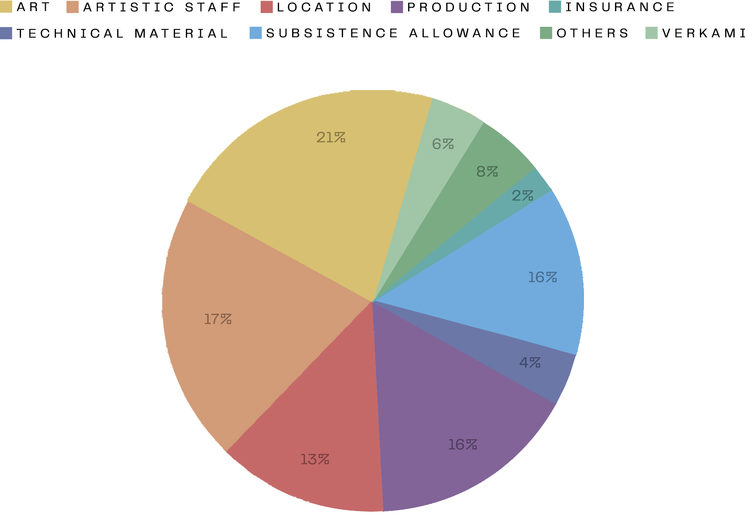 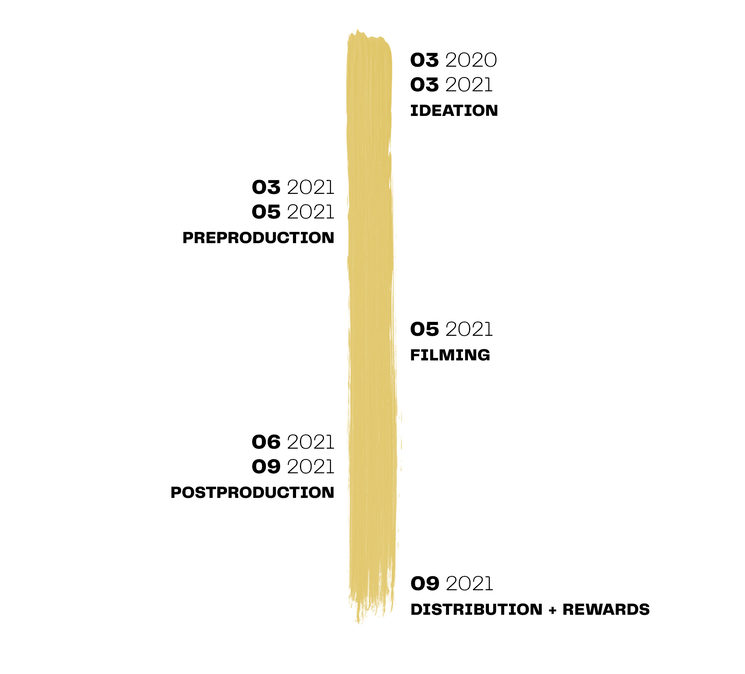 For more information about the project, follow us on @triptico_film.

If you have any questions, you can send us a message on tripticopelicula@gmail.com 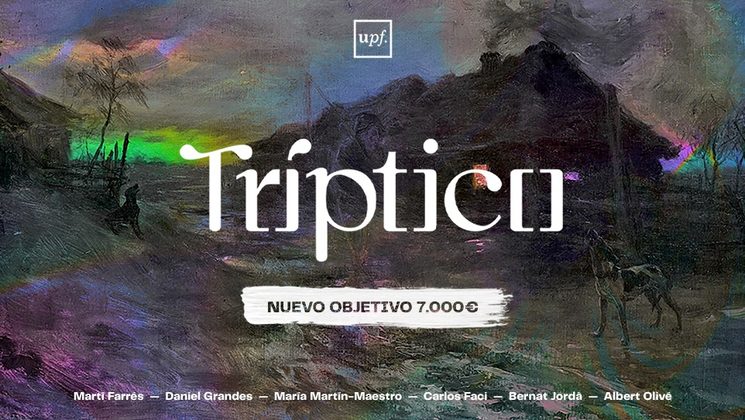 The persistence of Lucas

The renowned paranoias of the night

The garden of earthly delights