Do you want to take part in Niño Burbuja's new album?

As you can see in the video, we are not that good selling cereal ... so we ask you to take part in the first edition of our New Release "CALPICO" to receive an exclusive CD before launching, or to put your name in the credits among other rewards.

Signed CD + Download + Your name in the album credits.

Signed CD + Download + Your name in the album credits + T-shirt

Signed CD + Download + Your name in the album credits + T-shirt + Concert tickets + Choco-Grizziane box + Our djset in your living room party (date to be agreed depending on availability; Spain mainland only, for other locations please inquire)

Signed CD + Download + Your name in the album credits + T-shirt + Concert tickets + Choco-Grizziane box + Acoustic miniconcert in your living room (date to be agreed depending on availability; Spain mainland only, for other locations please inquire)

Niño Burbuja are Cris, Dani, Guille and Marco. We produce electronic music with an organic twist with lyrics in Spanish. Our music is based on synthesizers, guitars, vocals and drums. We have a 10 track new album on our hands that we want to manufacture, and it contains songs like these:

Your help to finance the manufacturing costs of 500 units of our new album in digifile CD format.

We invested all our savings in producing our album with Santi García (Ultramarinos Costra Brava) and mastering the CD at The Exchange in London, and we want to share this final stage so that you can be part of this project.

Our exclusive signed CD before its official launch with the chance to include your name in the credits, official T-shirts, tickets for the tour 2012/2013... and even a Dj Set or Acoustic Set in your living room! ... but above everything, the enormous satisfaction of having boosted the career of a band you've come to appreciate just before everyone else ;) 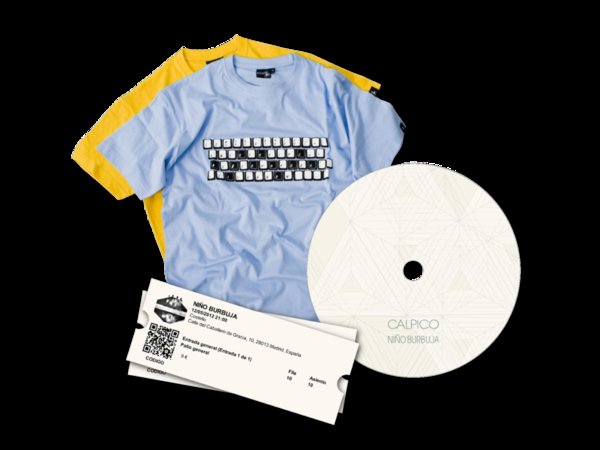 If we reach the funding target, we will send to you the CD, "fresh" from the factory, in late October 2012. You will have the copy before anyone else.

WHAT YOU HAVE TO DO

Just choose any of the rewards of the right column. The higher the price, the bigger the reward is. The money will only be charged if we reach our goal. Then and only then, we can order the manufacture of the disc and a few weeks later you'll have it at home.

You can also help by spreading the word of this project. Send it to a friend or post it on facebook or twitter to keep doing our music without depending on others.

WHAT THE HELL ARE CHOCO-GRIZZIANE??

Besides writing songs we also do a lot of nonsense. Our drummer Marco colour is "Choco" and always calls Cristian with her perfect-Roman Italian accent: "Grizzianè!" The absurd of this joke and the amount of hours we spent stuck in the rehearsal studio ended in this fictitious cereal brand Choco-Grizziane, a nice metaphor for what musicians often have to do to get the money to keep on creating songs.

But .... YOU CAN AVOID IT! Don´t let us end up selling a super chocolate-cereal brand! Support our project and become our sponsors!

Signed CD + Download + Your name in the album credits.

Signed CD + Download + Your name in the album credits + T-shirt

Signed CD + Download + Your name in the album credits + T-shirt + Concert tickets + Choco-Grizziane box + Our djset in your living room party (date to be agreed depending on availability; Spain mainland only, for other locations please inquire)

Signed CD + Download + Your name in the album credits + T-shirt + Concert tickets + Choco-Grizziane box + Acoustic miniconcert in your living room (date to be agreed depending on availability; Spain mainland only, for other locations please inquire)