The musicians Luis Peixoto, Fernando Barroso and Pedro Fariñas joined together to create a new band, 'TRIM'. They appear with the release of a CD + DVD , which will be produced in the next few weeks and sent to patrons in the first half of June.

Contribute to the project
View project in Galego, Català, Castellano and Português

From this very moment we decided to have you with us on this path through the studio to record the music that we have created and arranged recently , much of it composed by ourselves . The production of this work , which will be almost entirely live , will be accompanied by a DVD of the recordings in the studio. The DVD will have us playing the tracks of the cd live in the studio plus some extra stuff . In the coming weeks we will be working at full time , and hope to introduce this new project to you.

Thanks for your support . During these 40 days we will be in touch with news. 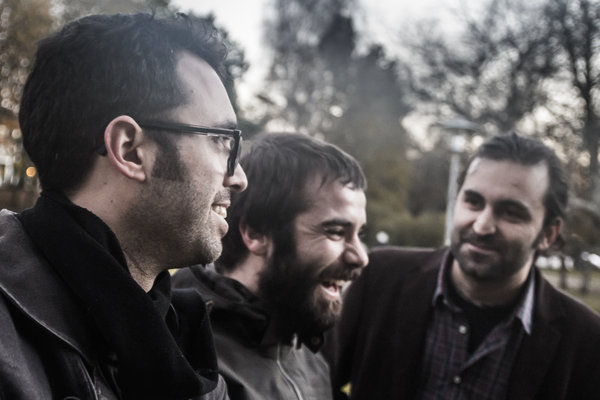 TRIM , the new trio of the musicians Luis Peixoto, Fernando Barroso and Pedro Fariñas - Galician bagpipes and strings , this band shows their vision of the current instrumental music with reminiscences of the folk music from Galicia and Portugal . Their individual career , background , and versatility acquired after participating in numerous projects , make this band a trio with a unique and innovator sound of the folk scene today.

This album will be presented on CD and DVD.

At the same time, sound and image will be recorded by Tomás Ageitos and David Ramos at 'A Ponte' Studio in Santiago de Compostela.

Apart from the tracks of the album, the DVD will also have interviews and some extra manufacturing process.

David Ramos - "Animaxes AV" and Marta Guijarro - "The Poca Monta Company" , are part of this team , They will be the creative makers of the video and graphic design .

Pedro Fariñas ( Vigo ) , a young piper but with many awards and experience in the back, as well as saxophonist in prestigious Reggae bands of the peninsula such as Transilvanians and Zamaramandi , coming to edit their new LP " Howling Around " . In the field of traditional music, he was a founding member of Anacos de Buxo , a member of the Canle Dadá quartet and soloist and member of the Pipe Band Xarabal ( Vigo ) . He made recordings for the David Russel (2006 ) Awards CD , for Musgafol (2009) , and the book - cd Gaita 2.1 (2010 ) , not to mention the album Semprevirente (2004 ) from Anacos de Buxo Quartet. Among his many prizes in competitions for quartets and soloists, the highlight was the 1st prize in the Trophée Maccrimmon in Bagpipe category at Festival Interceltique de Lorient, 2011 (France).

The CD and DVD will be recorded in the second week of April . The process of mixing , mastering and assembly video is expected to be finished early May. Thus , we estimated that after the period of 20 days to manufacture copies of the material, we will send our work to the patrons during the first half of June .