We start this crowdfunding for all those who want to pre order our new album and thus help us to bring up the release of our third album. You can also book gig dates, t-shirts… Thanks in advance.

Unplugged concert in your house, Galicia only (rest of the Universe check price)
+ Signed CD Digipack of our new album
+ T-Shirt

Where and when are we going to record it?

We want to release our third studio album, which we’ll began to record on Oct. 1st. The album will be recorded in several studios and the responsible for carrying the weight of the recording and mixing will be Luis Antelo. Mastering, not yet decided, will be done by Alan Douches (Pete Townsend, Mastodon, etc).

We launch this campaign as an opportunity to reserve records, t-shirts, tickets, gigs and thus and therefore help us to bring up the release of our third album.

What is the purpose of your funding?

Your contributions will be directly invested in the release of the album, if the initial amount is exceeded it will be reflected in more copies, more shirts, etc.

Pledges would be handed over in mid / late November ... although there are things that are not in our hands, such as the mastering or manufacturing of copies, but please be sure that as soon as we get them we will send them directly to your home. 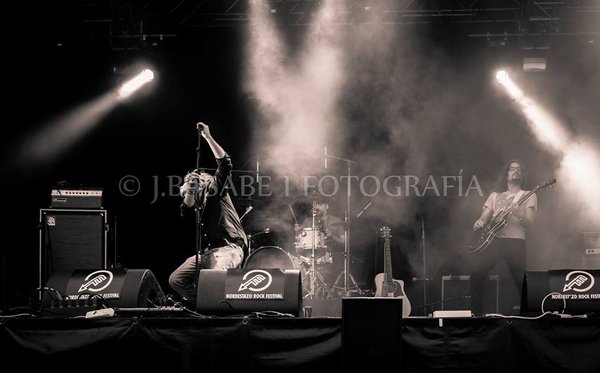 For those who don’t know us, we are a rock band from Ferrolterra-Galicia-Spain that began our history in 2005 under the name of Sweet Oblivion Band with which we released an homonym EP in 2005 and a first album called Melted to Oblivion in 2008. Due to copyright problems we had to change our name to SandFord Music Factory, and then we released our second album Awen in late 2011.

We’ve presented our albums live in Spain and north Portugal. Our second album made it into the list of best albums of the year in magazines like Rockzone, Mondosonoro and Radio 3 show, Capitan Demo. Also it reached out our borders with very good reviews in American and british webs like The Dedicated Rocker Society, Rock Regeneration and it was included as one of the best albums of the year in german web Psychorizon. Interviews in Popular1, Kerrang, Metal Hammer, HeavyRock, Rockzone, Mondosonoro, This is Rock, Estudio3 Radio galega and many more…

This is a short summary of our history, but the best way to meet a band is listening to it, below are the links to our first two albums…

First single of our first record, Melted to Oblivion

Live performance of one of the songs of our second album, recorded for a TVG tv show at Iguana Club

Second single of Melted to Oblivion

Here you can find more info about the band:

We are very excited with the new songs that will be part of our third album, if you liked what we did in the previous albums, you´ll like this album even more, we are sure!!!

Many thanks in advance to all of you who are going to reserve the album and therefore help us with our budget. Hopefully we won´t have to start the project in red numbers as it is not only the recording and edition, but also masterizing and this is not precisely cheap… so, THANKS FRIENDS!!!!

Unplugged concert in your house, Galicia only (rest of the Universe check price)
+ Signed CD Digipack of our new album
+ T-Shirt